Hello America! My name is Seth, what’s yours? Oh WOW! I had the pleasure of attending Trixie Mattel’s kick off date of her brand new Grown Up tour. You know Trixie Mattel right? She was a contestant on Season 7 of Rupaul’s Drag Race. She sashayed away twice but came back to win All Stars 3. She’s gone on to create the wildly successful online series UNHhhh with Russian hooker Katya Zamolodchikova. Maybe you’ve seen her stand up special, Skinny Legend, or her documentary, Moving Parts? Did you pre-order her actual book, Trixie and Katya’s Guide to Modern Womanhood, co-written by the aforementioned Katya? Purchased a sickening pallet from Trixie Cosmetics? I guess what I’m trying to get across is how incredibly hard-working this queen is! 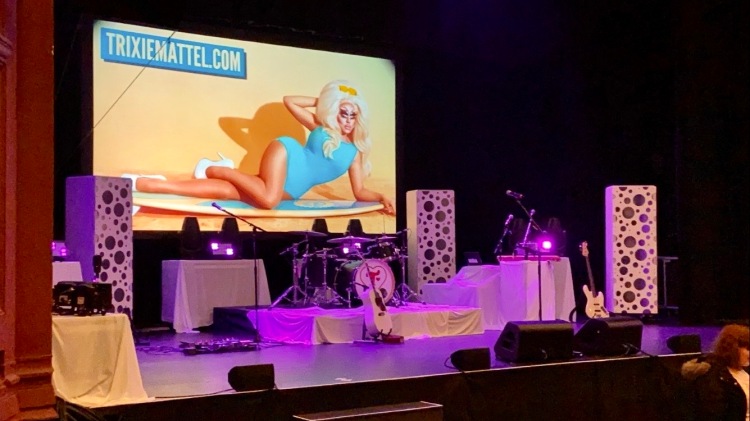 Okay, let’s get down to it; the reason you came here; a show review. Fair warning, there will be spoiler, but really there’s nothing like seeing Trixie in person. Truly! As I entered the Moore Theater, located in the heart of downtown Seattle, such a welcoming sight greeted me. A full live band setup! Behind the instruments, a large screen advertised everything Trixie. The show started 15 minutes late, but we are on drag queen time. This is to be expected. The crowd is filled with men, women, and non-binary people of all ages. The environment was electric. Trixie has a very dedicated fan base and it shows in the whispers and speculations of what we will see tonight. The lights go down.

Instantly, we are greeted by the booming voice of Craig MacNeil, of the Whimsically Volatile podcast. He’s telling us not to use flash photography and giving a comedic rendition of the typical things you hear when attending a stage show. He also let’s us know that Trixie will be unable to attend the show that night because she was at the doctor’s office. Momentary confusion quickly subsides as a video appears on the screen of Trixie in the doctor’s office. The doctor is played by, yea you guessed it, Katya! The show opens with a truly unhinged but hilarious sketch. The lights go out again.

The band rushes out and take their places first. Quickly afterwards, they kick into what felt like a glam stadium rock groove reminiscent of what you would expect to hear at a Queen concert. Just like Freddie Mercury, the start of the show Trixie Mattel saunters out taking in the applause and cheers from the adoring crowd. Fully formed, the group kicks into “We Got the Look”. We are instantly transported from grey, rainy Seattle to the beaches of Malibu. What a welcome break from Seattle life, but that’s not relevant to this review. After quick hellos and introductions, Trixe & Co. plays 2019 single “Yellow Cloud”. This song was really a turning point in Trixie’s growth. She went from playing solely country music to incorporating surf rock and female led power pop styles into her music. What a journey! It’s like when Bob Dylan went electric without the complaining.

Throughout the next hour and a half, with no intermission I might add, you will experience comedy, music, and just an overall reflection on what it’s like to be grown up. That’s the title of the tour! You’ll understand that joke after you see the show, go buy a ticket! A noticeable difference in this tour, is a lot more music. Personally that is very welcomed. You all know that I love going to concerts. I’ve always wanted to see more Trixie music incorporated into her live show and boy did we get it! I’m still holding out that I’ll one day get to see Trixie perform “I Know You All Over Again” and “Seen My Man” of her first album Two Birds. However, in Grown Up you’ll hear mostly songs of her new album Barbara that was actually released today. Go support our queen and purchase it. I’m actually listening to it on repeat as I type this.

Another fun song thrown in was a cover of The Go-Go’s hit “Vacation”. Her rendition was a stripped down version that really made you long to go on your own vacation. Trixie has been declaring her love for girl power pop groups in every interview that I’ve seen in recent months. It really shows in her new music. Maybe next tour, Michelle Branch will open for her. Stay tuned! I can’t finish talking about her performances without touching on her performance of “Jesse Jesse” with video and pictorial projections of actor Jesse Eisenberg. Very extra! It felt like something I would make as an eight grade with an innocent crush in the 90’s.

There’s another fun break towards the middle of the show that features reimagined commercials from the 90’s as interpreted by Trixie. One stand out was a drawstring toy doll that basically a montage of Trixie’s cackling laugh. Also, a funny commercial shows the transformation of the game of “Life” into the game of “Gay Life”. Apparently, in that game your goal is to save up enough to go on Prep! Quite possibly my favorite commercial is the one that features a doll that brainwashes you into becoming a lesbian. This is comedy; don’t read into it too much. We all know Trixie’s brand of dark humor.

As the first stop of the tour, we were treated to an encore of “Mama Don’t Make Me Put on the Dress Again”. Trixie said that they would be gauging the temperature of the crowd to know if they will do an encore on every date. If you want to hear this song, make sure to clap and let Trixie know you’re having fun throughout the show.

And that’s the show! Fifty reveals later, we’ve made it. Back to dreary Seattle. This show was incendiary and most likely my favorite show that I’ve seen of hers. After the show, I was reflecting on how wild it is that the first show I saw of hers was Ages 2+ in dingy club Re-bar. It was actually the location of Nirvana’s album release for Nevermind. Nirvana got kicked out of their own record release party for starting a food fight there. Anyways, I was also lucky enough to see Trixie on her Moving Parts tour, which was located at the same theater as her show Grown Up. More like glow up am I right? Grown Up is really such an amazing show that I will recommend, sometimes uncomfortably so, to everyone I come in to contact with. It’s the amalgamation of everything that makes Trixie Mattel so legendary. It felt so intimate in the large sold out theater, which shows how hard working and incredible of a person that she is to build that connection. Currently, Grown Up is only a 29 city tour, but based on past trends I’m sure she will announce a 2nd leg later in the year. Oh Honey! If you get that chance to see Trixie live, do it!

Published by Thanks for Coming! A RuPaul's Drag Race Podcast

Jamal and Seth met in 2005 as members of the Indiana University Marching Hundred. Seth played Clarinet and Jamal played trumpet. They became fast friends and still share great mutual friends over thirteen years later. Stony and Jamal met at IU as well, sharing mutual, non-band friends, and began dating in 2011. Eventually the two would become married in May of 2014. Stony came into the circle as a result and the rest is herstory! Thanks for Coming Podcast originally started as a RuPaul’s Drag Race recap show, airing once a week and spilling all the tea on the latest drag drama. After RuPaul’s Drag Race All Stars 3 and season 10 aired, the show morphed into a queer culture podcast; covering all kinds of fun topics in pop culture and queer life. January 2019 will mark the first birthday of the show and the guys couldn’t be more excited. Not only do they get to share their commentary on RuPaul’s Drag Race and queer life, but it’s also a great way for friends to chat and catch up once a week. Thanks for Coming, America! View more posts